Slices of Life in Hong Kong 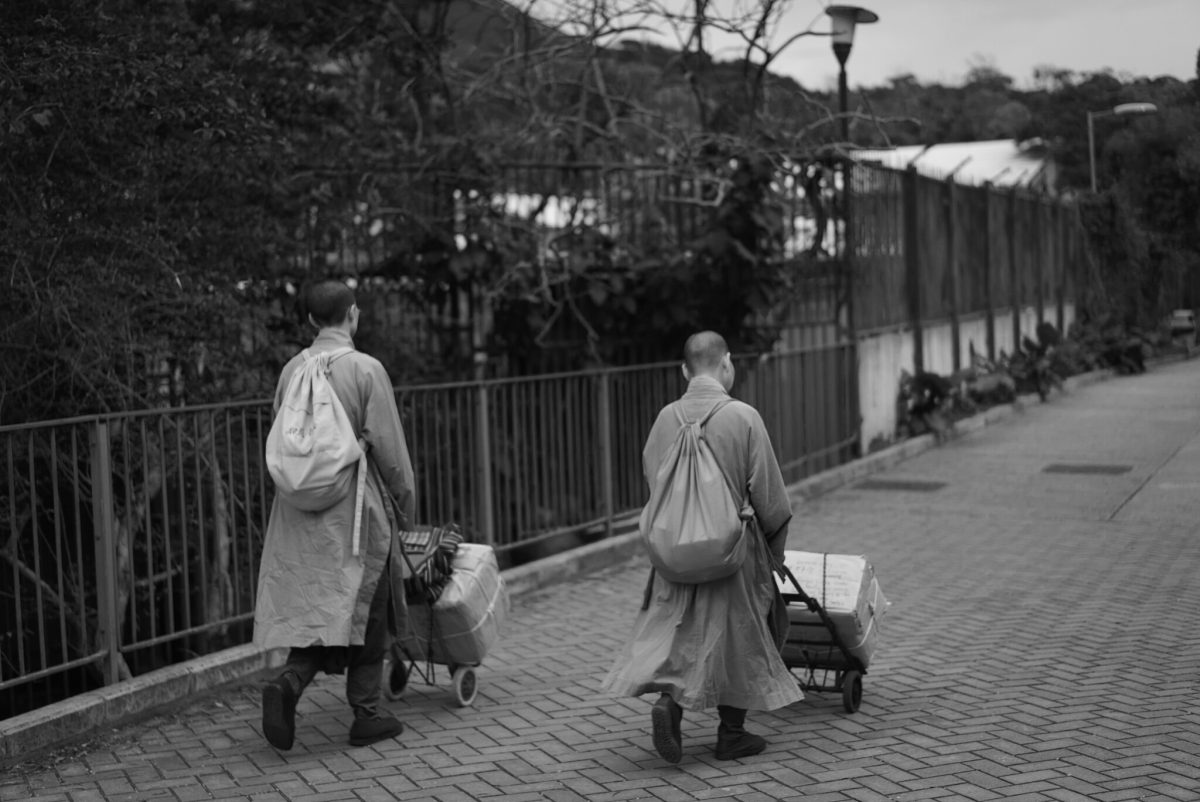 Slices of Life in Hong Kong

When we started planning our long full-time trip through Hawaii and Asia, China was on our list. But after some quick research, we realised that getting visas as American and French citizens was going to be a hassle. Not only were we supposed to apply in our respective countries, but my visa would be valid only if I entered the country less than 3 months after applying. We couldn’t make it work with our other prior plans to visit Hawaii and Japan.

Being under the governance of China and enjoying the status of autonomous territory at the same time, Hong Kong was the closest to China we would be able to go to without struggling with visas.

We ended up spending two weeks in Hong Kong. Although we had mixed feelings about it from the start, we were still able to enjoy little moments there. After Hawaii and Sri Lanka, I have gathered here some pictures from our stay in Hong Kong which depict slices of life, in other words, moments of the ordinary life through scenes in the streets of Hong Kong.

We say a picture is worth a thousand words and I think it’s particularly true in the pictures shown below. I chose black and white in the manner of street photography because I feel like we can focus more on the story behind the image. 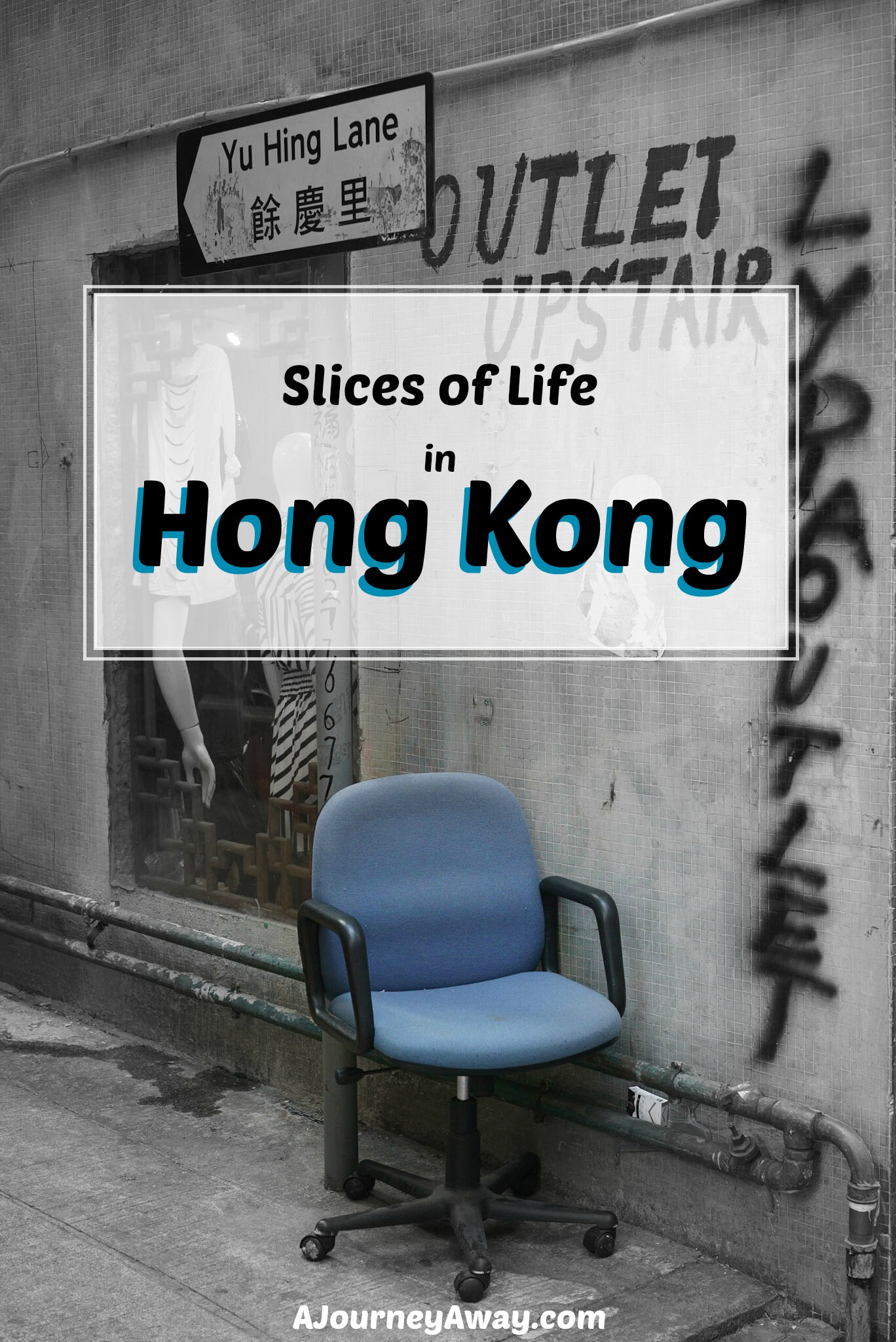 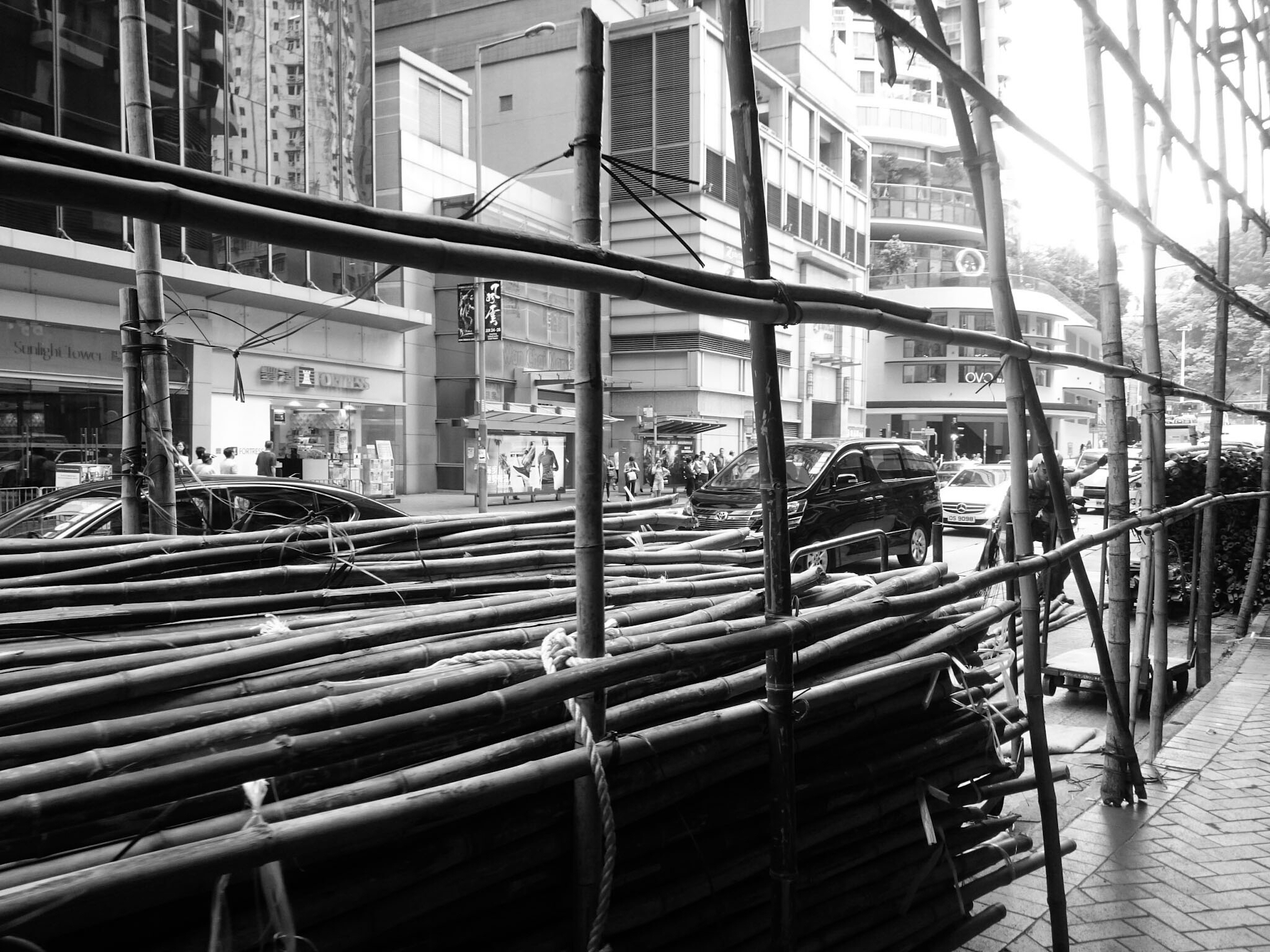 Construction work in Wan Chai – From the moment we arrived, we noticed that the city seems to be under constant construction. It has been evolving at a fast pace and all the cranes and scaffolding are a clear sign of it. We were also very surprised to see that scaffolding are made out of bamboo here. The building that we were staying at was actually completely hidden behind these bamboo structures covered with nets. The bamboo poles are apparently easy to climb and we were welcomed in the building with a funny yet not reassuring message in the lift warning us against burglars. 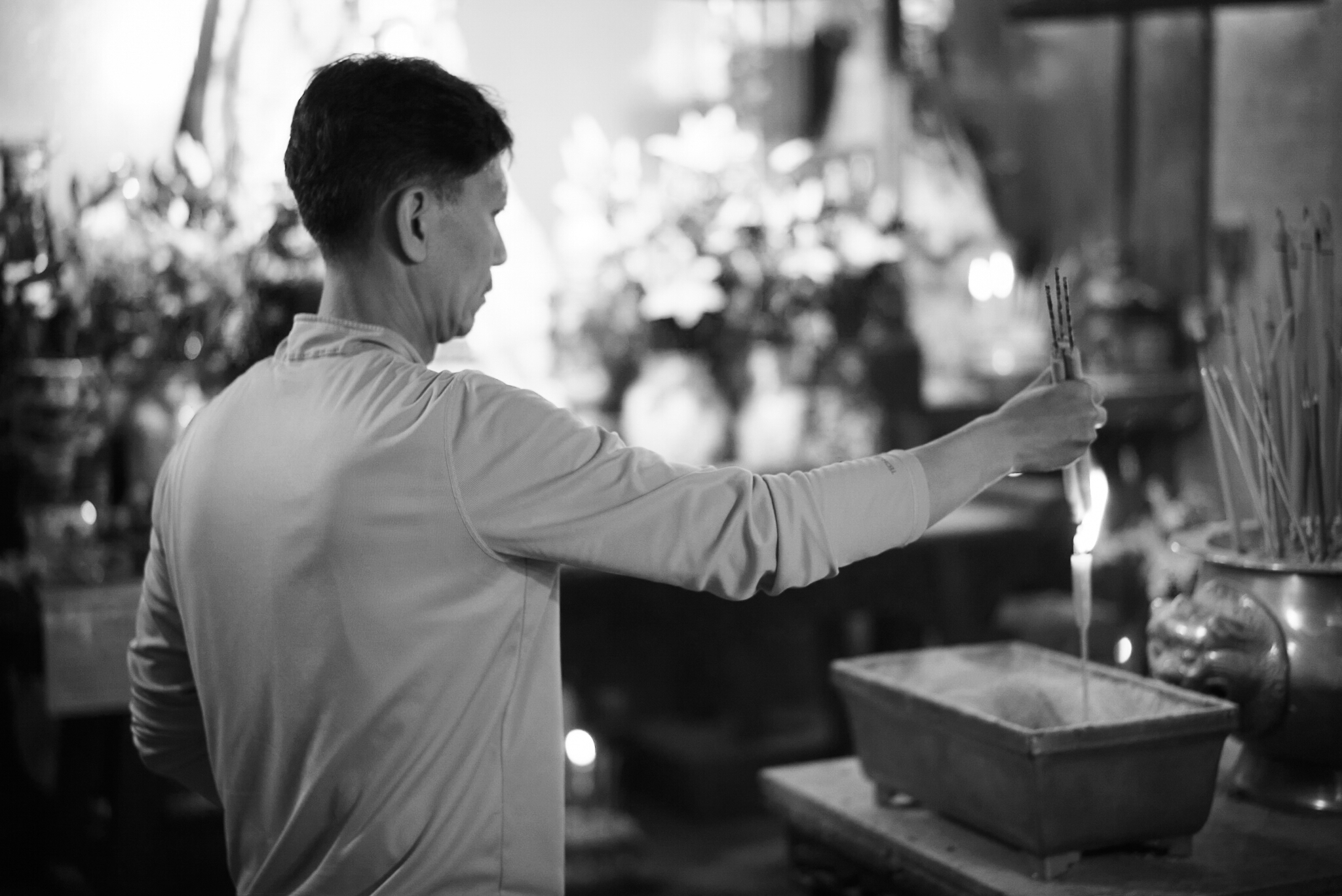 Praying at Man Mo temple – Temples in Hong Kong are places where you can escape from the agitation of the city and enjoy a moment of peace. There are a lot of them and some are real gems, like Man Mo temple and its spiral incenses or the quiet Pak Tai temple that has beautiful colourful lanterns. 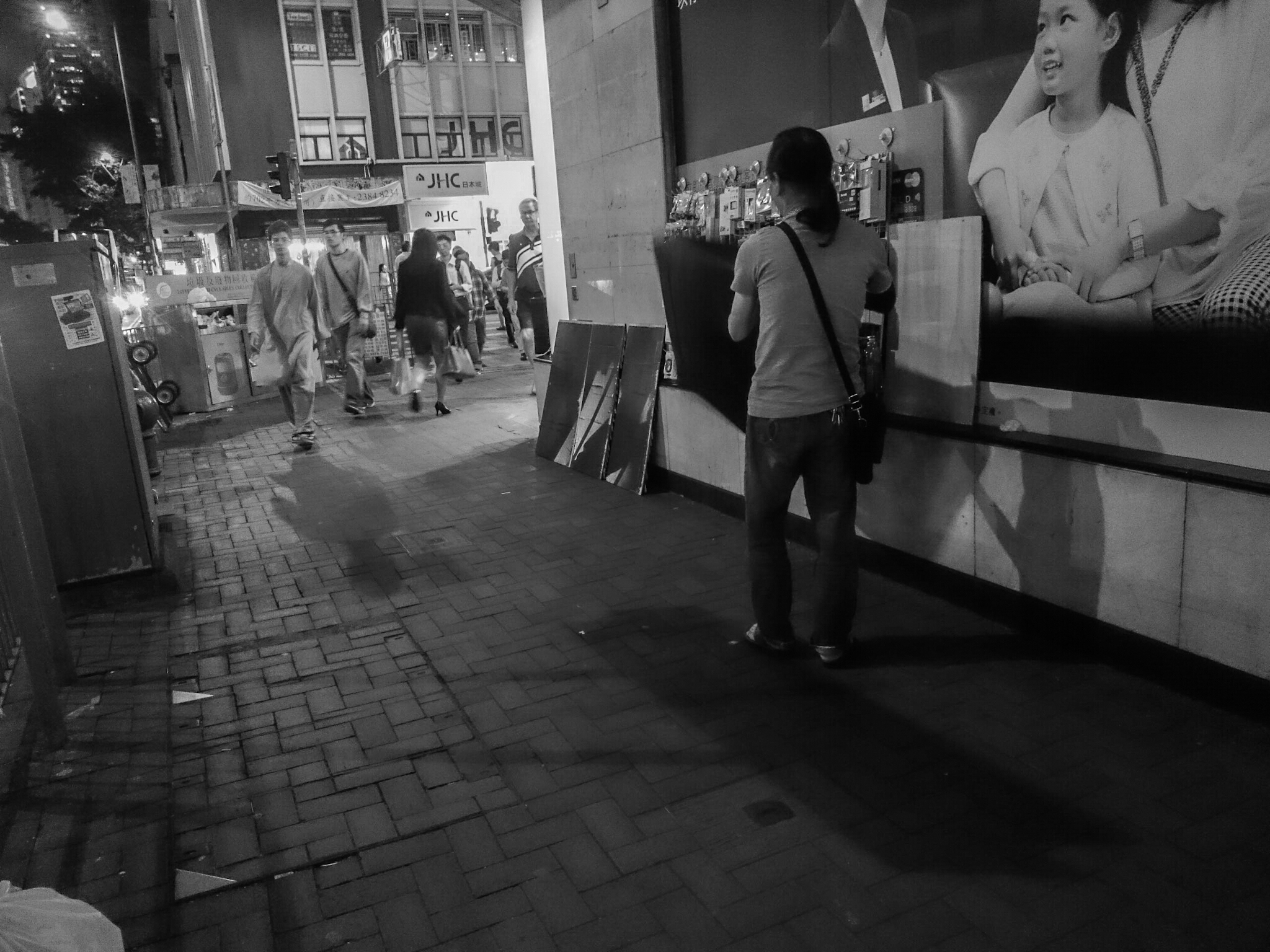 Setting a phone accessories stall at night fall – Hong Kong is a city of contrasts. Some streets are packed with shopping centers and advertising screens, sometimes reminding us of Tokyo. In the same areas, it was not unusual to see ephemeral stalls selling phone accessories, jewelry or wallets emerging after the shops closed at night. 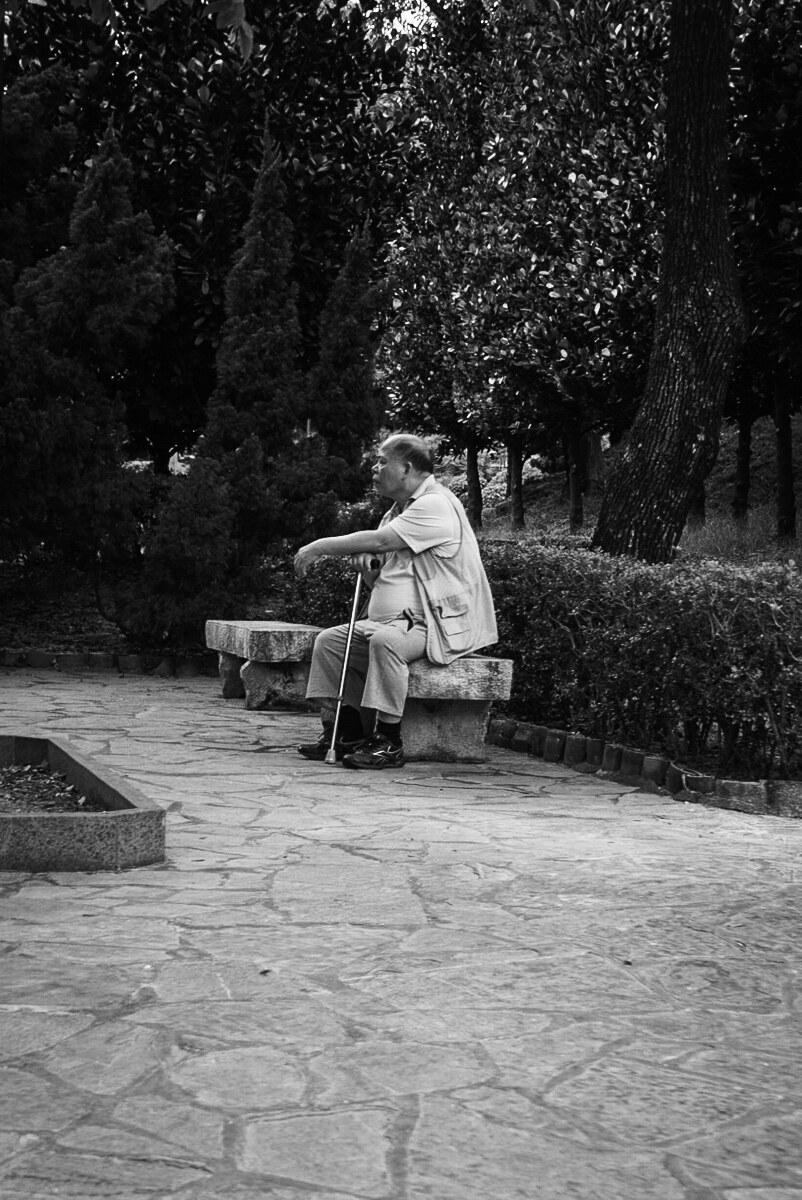 Afternoon stroll in Kowloon walled city park – We were deeply touched by Hong Kong history and particularly the Kowloon walled city. We can see it today as a very elegant and well-kept park, but it wasn’t always this way. Before it was destroyed in the end of the 1900s, Kowloon walled city was a packed slum, heaven to criminals, drug dealers, prostitutes and unlicensed dentists. Some families didn’t have any other choices but to live there where they could benefit from extremely cheap rents before they were relocated when the city was replaced with a park. We noticed that most visitors of the park were old people and we couldn’t help but wonder if they had ever lived in the walled city. 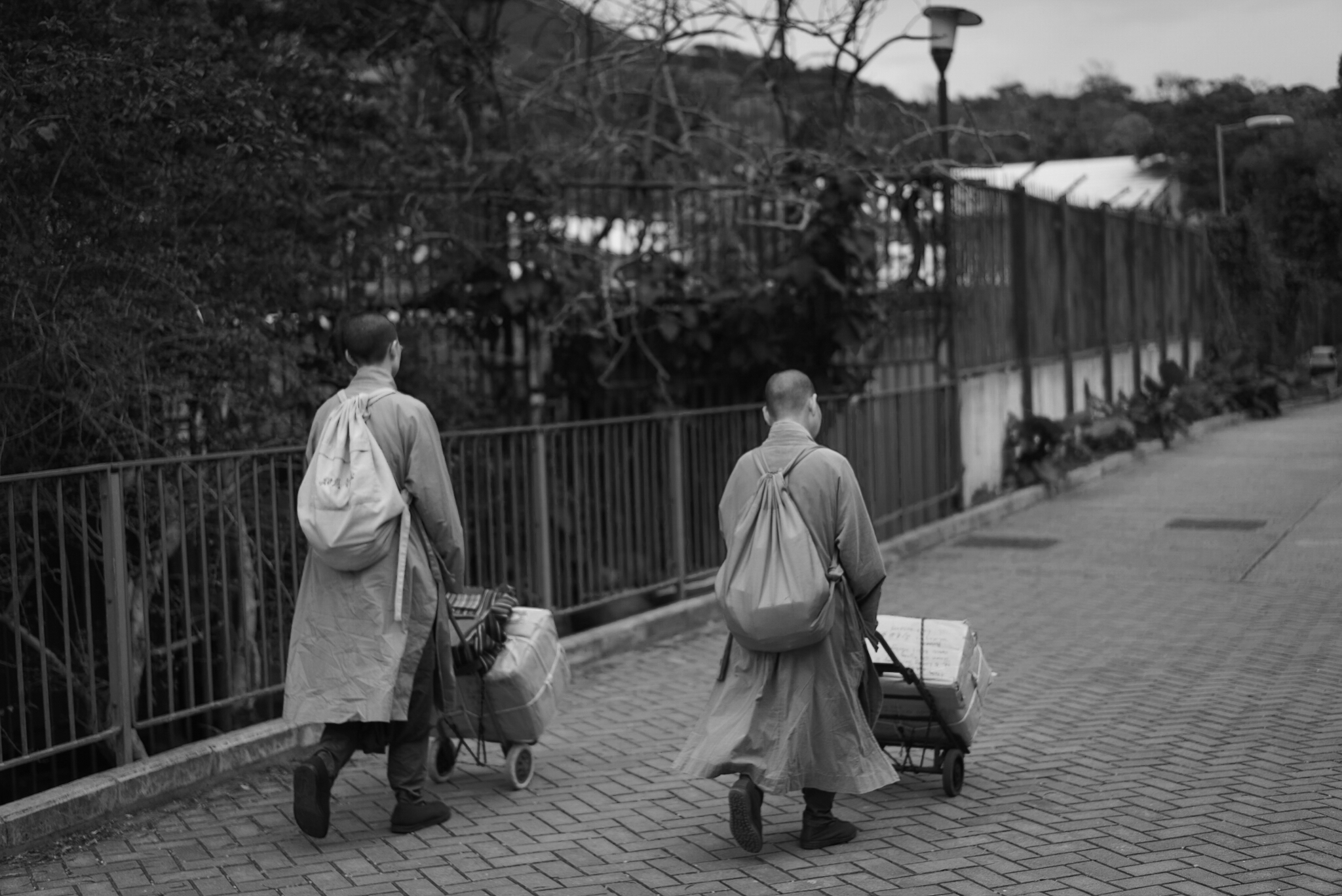 Po Lin monastery monks – When we visited the Big Buddha on Lantau island, I was as amazed by the beautiful and impressive statue as overwhelmed by the amount of tourists there. While walking away from the crowds, we spotted these two monks dressed in beige cotton robes going on with their daily activities. 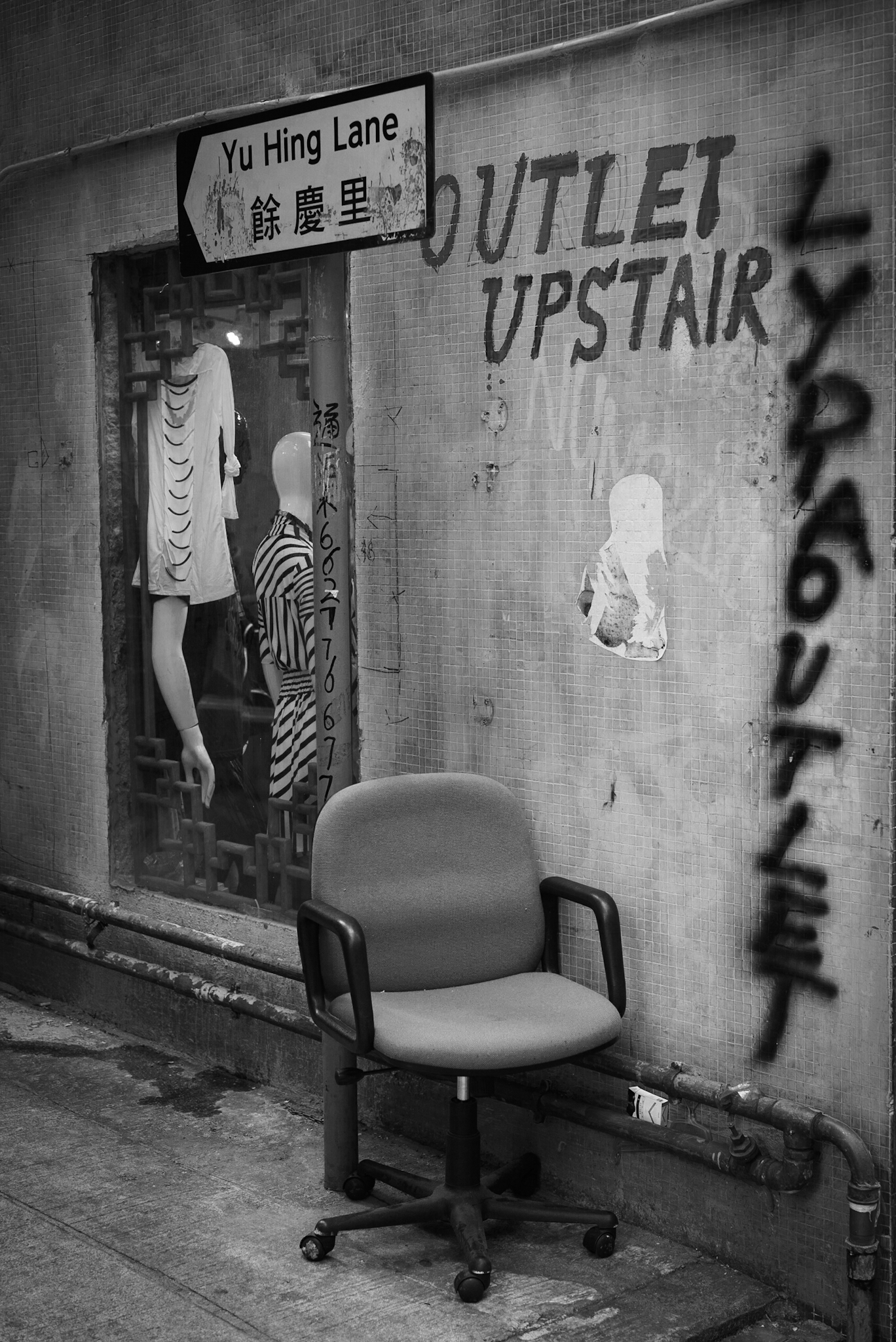 Lonely chair on the way to Hollywood Road – In the streets of Hong Kong, we noticed that it was common to see chairs like on this picture, especially in small alleys. That’s where people would gather to hang out and grab a bite after a day of work. 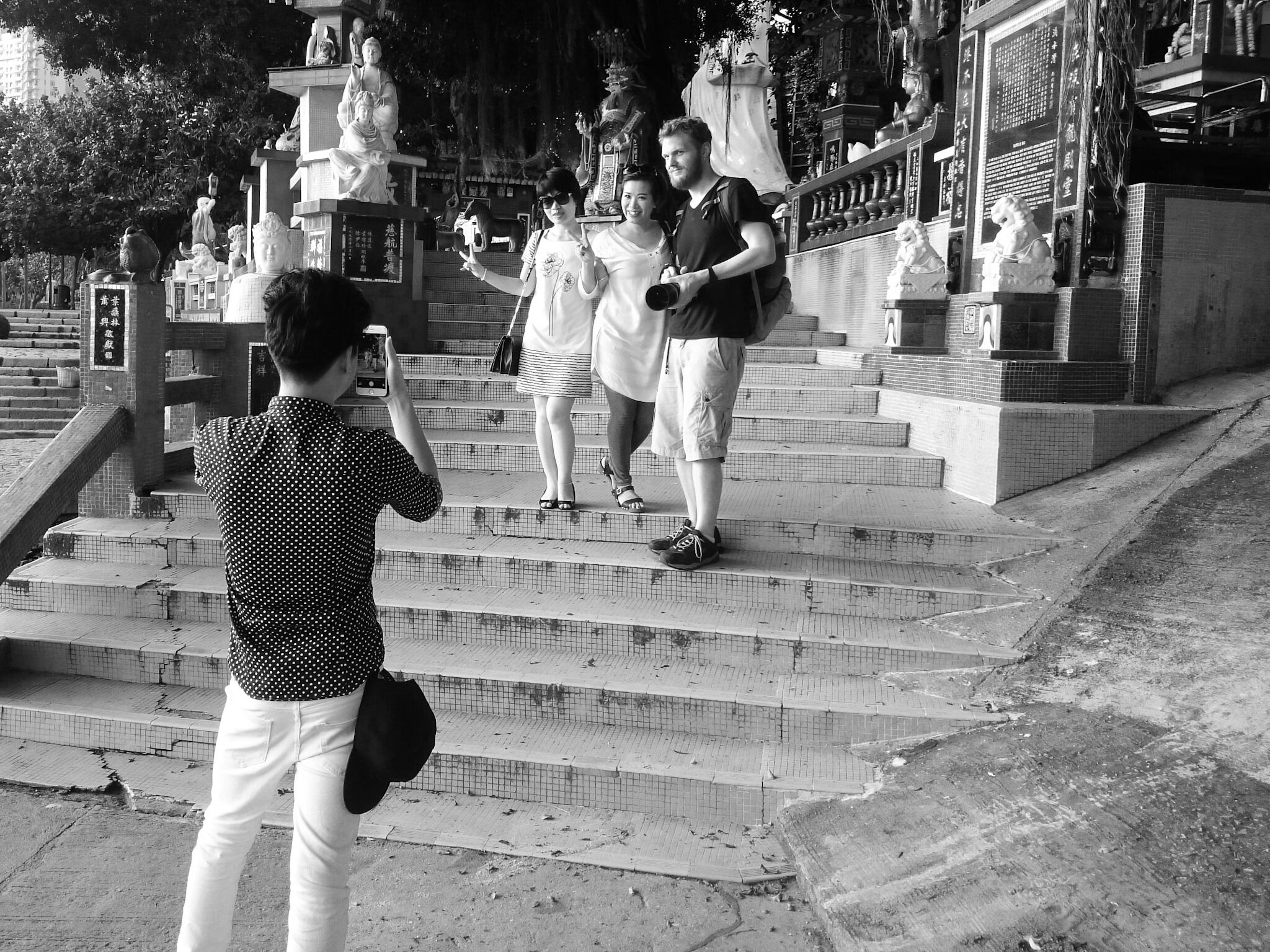 Being the very tall American guy at Repulse Bay – It happened to us a lot that locals wanted to take pictures with us in South-East Asia. As flattering as it is, we wouldn’t always say yes because it would sometimes make us uncomfortable. In this precise instance, Simon didn’t actually have a choice. We passed this group as we were walking together until I realised I was by myself. These two women had grabbed Simon by his arm to pose with him, all giggly, without letting him have a say!

Have you ever been to Hong Kong ? Do you think these pictures reflect life there?